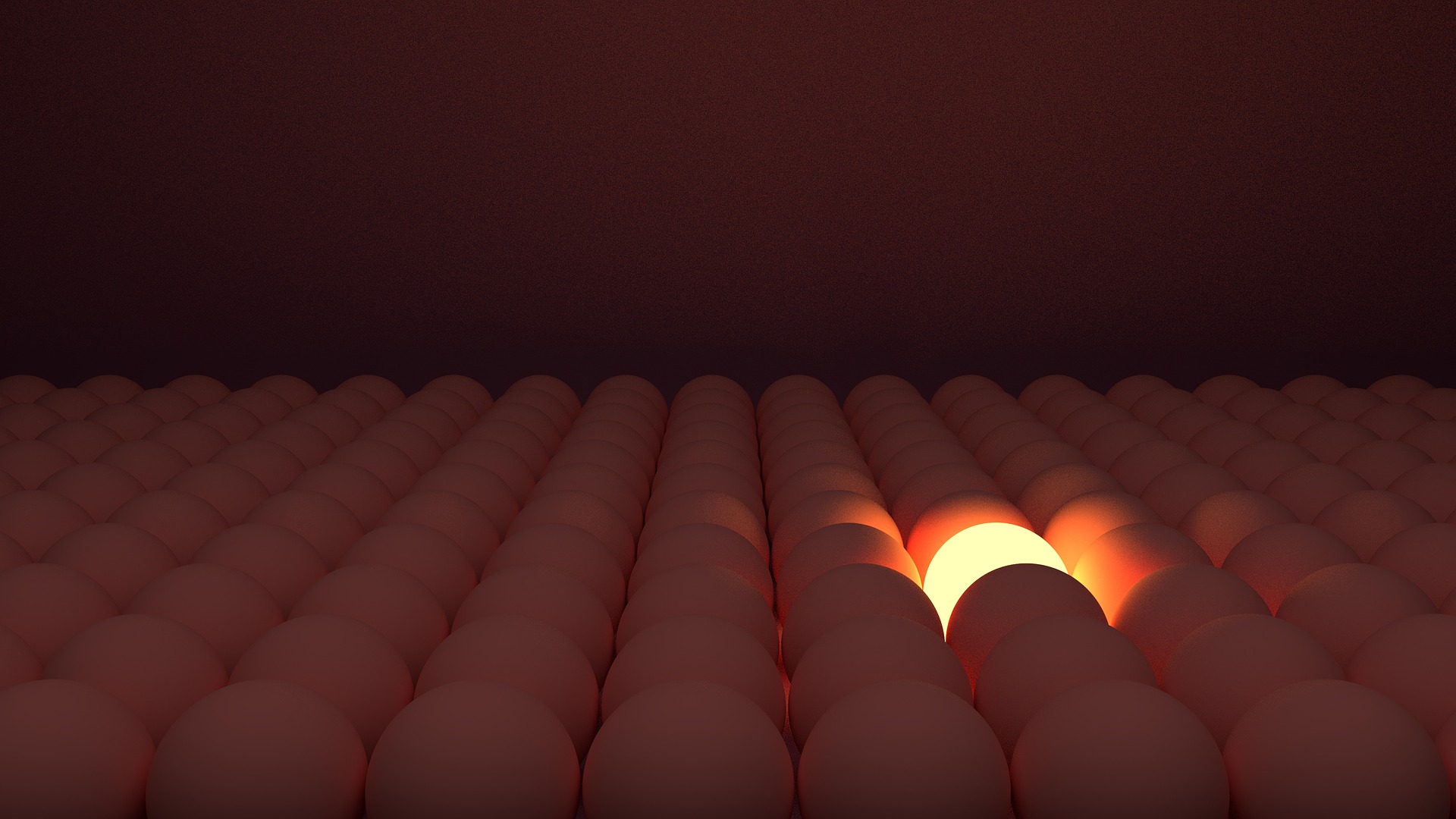 Angular runs its change detection mechanism periodically so that changes to the data model are reflected in an app's view. Change detection can be triggered either manually or through an asynchronous event (for example, a user interaction or an XHR completion).

Change detection is a powerful tool, but if it's run very often, it can trigger a lot of computations and block the main browser thread.

To understand how Angular's change detection works, let's look at a sample app!

You can find the code for the app in this GitHub repository.

The app lists employees from two departments in a company—sales and R&D—and has two components: 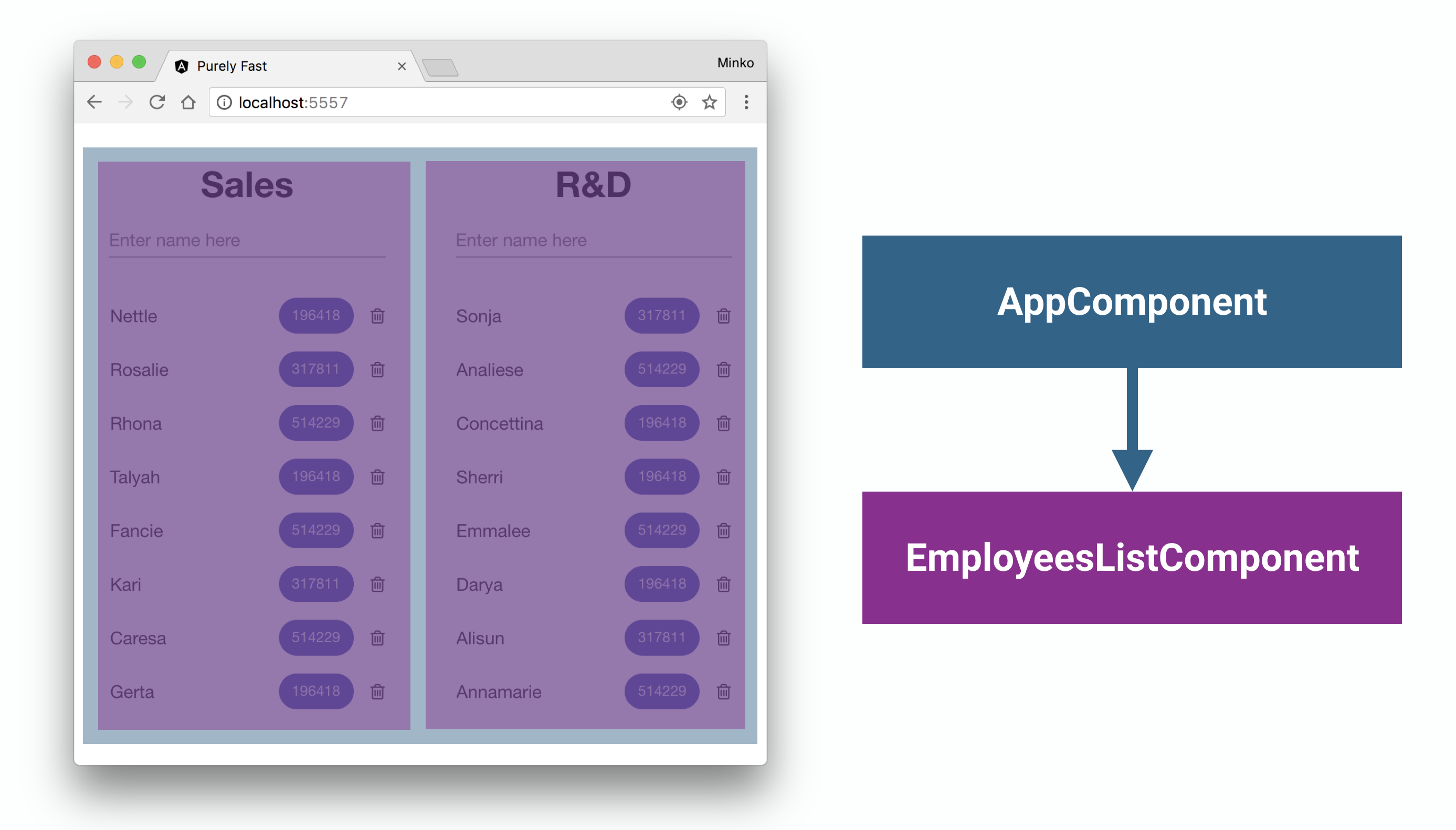 You can see the two instances of EmployeeListComponent in the template for AppComponent:

For each employee there's a name and a numeric value. The app passes the employee's numeric value to a business calculation and visualizes the result on screen.

For simplicity, the app is using an inefficient version of the fibonacci function as its calculation to show the implications of heavy bindings in an app.

Now take a look at EmployeeListComponent:

EmployeeListComponent accepts a list of employees and a department name as inputs. When the user tries to remove or add an employee, the component triggers a corresponding output. The component also defines the calculate method, which implements the business calculation.

Here's the template for EmployeeListComponent:

This code iterates over all the employees in the list and, for each one, renders a list item. It also includes an ngModel directive for two-way data binding between the input and the label property declared in EmployeeListComponent.

With the two instances of EmployeeListComponent, the app forms the following component tree: 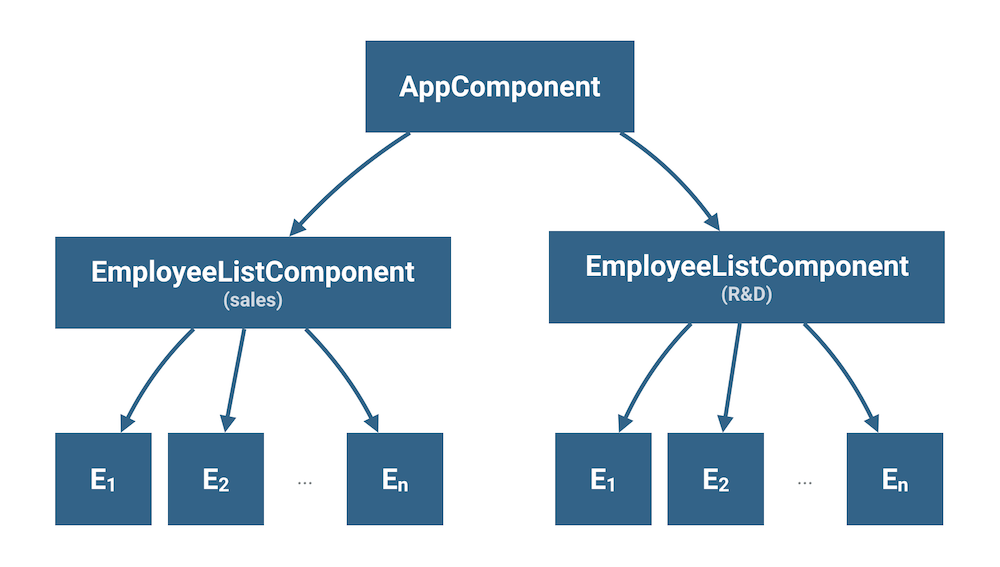 AppComponent is the root component of the application. Its child components are the two instances of EmployeeListComponent. Each instance has a list of items (E1, E2, etc.) that represent the individual employees in the department.

When the user begins entering the name of a new employee in the input box in anEmployeeListComponent, Angular triggers change detection for the entire component tree starting from AppComponent. This means that while the user is typing in the text input, Angular is repeatedly recalculating the numeric values associated with each employee to verify that they haven't changed since the last check.

To see how slow this can be, open the non-optimized version of the project on StackBlitz and try entering an employee name.

You can verify that the slowdown comes from the fibonacci function by setting up the example project and opening the Performance tab of Chrome DevTools.

Now click Record (in the top-left corner of the Performance panel) and start typing in one of the text boxes in the app. In a few seconds, click Record again to stop recording. Once Chrome DevTools processes all the profiling data it collected, you'll see something like this:

If there are many employees in the list, this process may block the browser's UI thread and cause frame drops, which leads to a bad user experience.

Now when the user types in a text input, change detection is only triggered for the corresponding department: 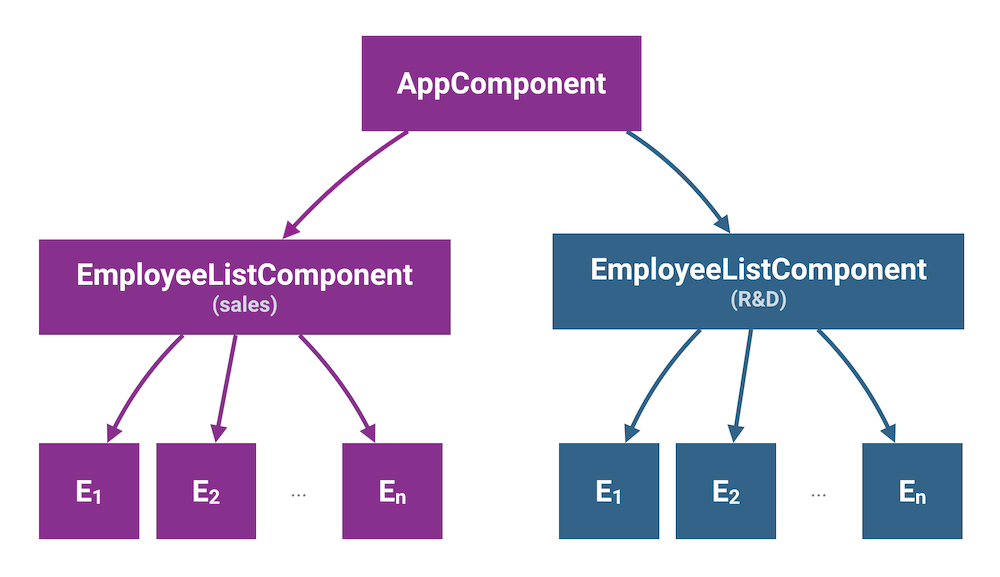 You can find this optimization applied to the original application here.

You can read more about the OnPush change detection strategy in the official Angular documentation.

To see the effect of this optimization, enter a new employee in the application on StackBlitz.

Even though the change detection strategy for the EmployeeListComponent is now set to OnPush, Angular still recalculates the numeric value for all employees in a department when the user types in the corresponding text input.

To improve this behavior you can take advantage of pure pipes. Both pure and impure pipes accept inputs and return results that can be used in a template. The difference between the two is that a pure pipe will recalculate its result only if it receives a different input from its previous invocation.

Remember that the app calculates a value to display based on the employee's numeric value, invoking the calculate method defined in EmployeeListComponent. If you move the calculation to a pure pipe, Angular will recalculate the pipe expression only when its arguments change. The framework will determine if the arguments of the pipe have changed by performing a reference check. This means that Angular won't perform any recalculations unless the numeric value for an employee is updated.

Here's how to move the business calculation to a pipe called CalculatePipe:

The transform method of the pipe invokes the fibonacci function. Notice that the pipe is pure. Angular will consider all pipes pure unless you specify otherwise.

Finally, update the expression inside of the template for EmployeeListComponent:

That's it! Now when the user types in the text input associated with any department, the app won't recalculate the numeric value for individual employees.

In the app below you can see how much smoother the typing is!

To see the effect of the last optimization try this example on StackBlitz.

The code with the pure pipe optimization of the original application is available here.

When facing runtime slowdowns in an Angular app: