You reached this article probably because you're developing an app that uses the Web Audio API and experienced unexpected glitches such as popping noises from the output, or you are hearing something unexpected. You might already be involved in a crbug.com discussion and a Chrome engineer asked you to upload "tracing data" or look into the graph visualization. This article shows how to obtain the relevant information so we can understand a problem and eventually fix the underlying issue.

There are two tools that will help you when profiling Web Audio, about://tracing and the WebAudio extension in Chrome DevTools.

When do you use about://tracing? #

When mysterious "glitches" happen. Profiling the app with the tracing tools gives you insights on:

It usually shows missed audio callback deadlines or big garbage collection that might cause unexpected audio glitches. This information is useful for understanding an underlying problem, so Chromium engineers will often ask it especially when the local reproduction is not feasible. The general instructions for tracing are available here.

When do you use Web Audio DevTools extension? #

When you want to visualize the audio graph and monitor how the audio renderer performs in real time. The audio graph, a network of AudioNode objects to generate and synthesize an audio stream, often gets complex but the graph topology is opaque by design. (The Web Audio API doesn’t have features for node/graph introspection.) Some changes happen in your graph and now you hear silence. Then it’s time for debugging by listening. It is never easy, and it becomes more difficult when you have a bigger audio graph. The Web Audio DevTools extension can help you by visualizing the graph.

With this extension, you can monitor a running estimate of render capacity, which indicates how the web audio renderer performs over a given render budget (e.g. approximately 2.67ms @ 48KHz). If the capacity goes near 100 percent, that means your app is likely to produce glitches because the renderer is failing to finish the work in the given budget.

How to capture tracing data #

The instructions below written are for Chrome 80 and later.

For best results, close all other tabs and windows, and disable extensions. Alternatively you can either launch a new instance of Chrome or use other builds from different release channels (e.g. Beta or Canary). Once you have the browser ready, follow the steps below:

How to analyze tracing data #

In operating system mode, the AudioOutputDevice thread runs all the web audio code. The AudioOutputDevice is a real-time priority thread originating from the browser's Audio Service that is driven by the audio hardware clock. If you see irregularity from the trace data in this lane, it means the callback timing from the device may be jittery. The combination of Linux and Pulse Audio is known to have this problem. See the following Chromium issues for more details: #825823, #864463.

In Worklet Mode, which is characterized by one thread jump from AudioOutputDevice to the AudioWorklet thread, you should see well-aligned traces in two thread lanes as shown below. When the worklet is activated all the web audio operations are rendered by the AudioWorklet thread. This thread is currently not a real-time priority one. The common irregularity here is a big block caused by the garbage collection or missed render deadlines. Both cases lead to glitches in the audio stream. 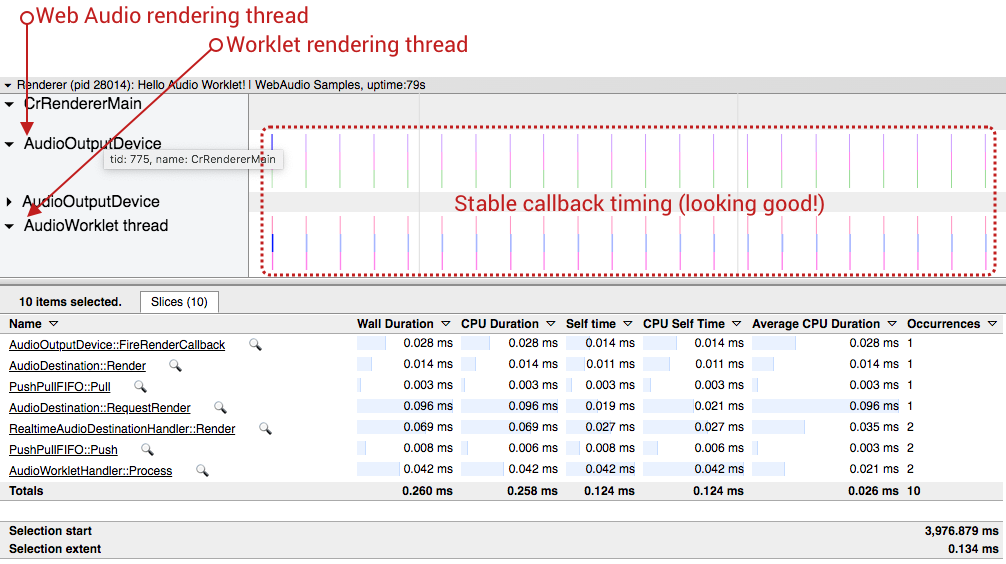 The screenshot below (Chromium issue #796330) is a typical example of when code in AudioWorkletProcessor takes too long and goes beyond a given render budget. The callback timing is well behaved but the audio processing function call of the Web Audio API failed to complete the work before the next device callback.

Unlike on the operating system audio rendering thread, garbage collection is managed on the worklet thread. That means if your code does memory allocation/deallocation (e.g. new arrays) it eventually triggers a garbage collection which synchronously blocks the thread. If the workload of web audio operations and garbage collection is bigger than a given render budget, it results in glitches in the audio stream. The following screenshot is an extreme example of this case.

The precise timing of audio callback is the most important thing for web audio. This should be the most precise clock in your system. If the operating system or its audio subsystem cannot guarantee a solid callback timing, all the subsequent operations will be affected. The following image is an example of jittery audio callback. Compared to the previous two images, the interval between each callback varies significantly.

Use the Web Audio DevTools extension #

You can also use the DevTools extension specifically designed for the Web Audio API. Unlike the tracing tool, this provides real time inspection of graphs and performance metrics.

This extension needs to be installed from the Chrome Web Store.

After the installation, you access the panel by opening Chrome DevTools and clicking “Web Audio” on the top menu. 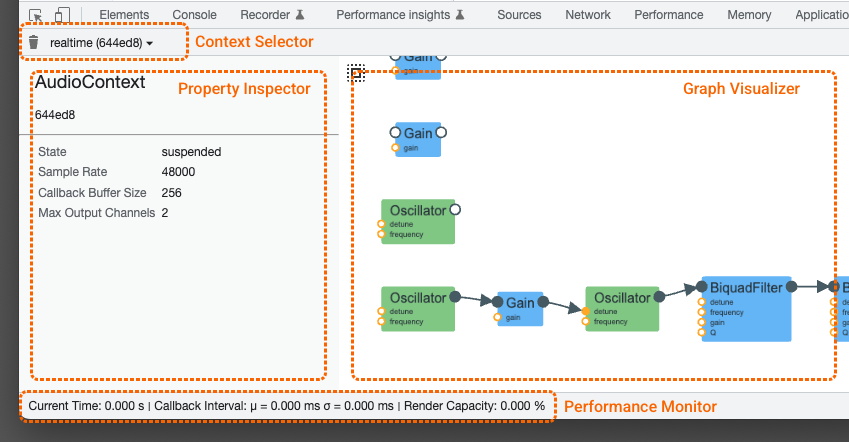 Since a page can have multiple BaseAudioContext objects, this drop-down menu allows you choosing the context you want to inspect. You can also manually trigger garbage collection by clicking the trash can icon on the left.

The side panel shows various properties of a user-selected context or AudioNode. Inspecting dynamic values in AudioParam is not supported.

This view renders the current graph topology of a user-selected context. This visualization changes dynamically in real time. By clicking an element in the visualization, you can inspect the detailed information on the property inspector.

The status bar at the bottom is only active when the selected BaseAudioContext is an AudioContext, which runs in real-time. This bar shows the instantaneous audio stream quality of a selected AudioContext and is updated every second. It provides the following information:

You can manually trigger a garbage collector by clicking the trash can icon.

The extension is now a recommended method by the Chrome Web Audio team, but the legacy WebAudio DevTools panel is also available. You can access this panel by clicking the "three dots" menu in the top right corner of DevTools, then going to More tools, then WebAudio. 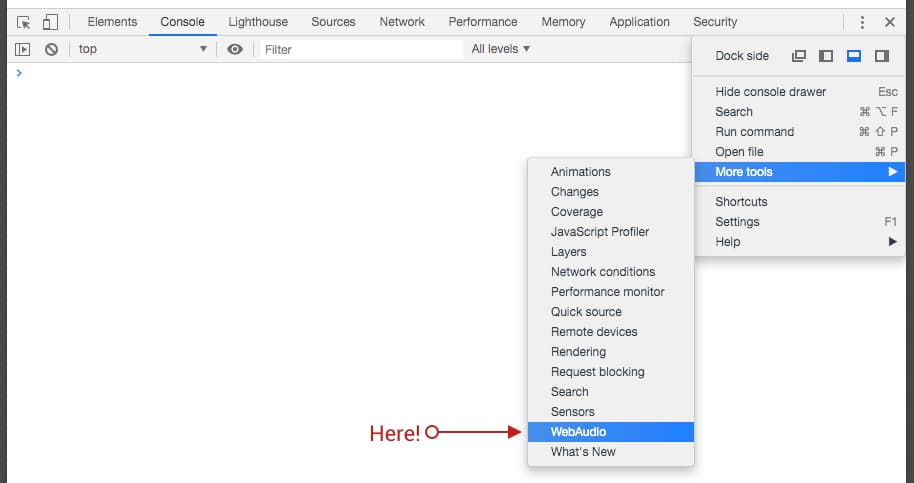 Debugging audio is hard. Debugging audio in the browser is even harder. However, these tools can ease the pain by providing you with useful insights on how the web audio code performs. In some cases, however, you may find problems in Chrome or the extension. Then do not be afraid to file a bug on crbug.com or on the extension issue tracker.

Photo by Jonathan Velasquez on Unsplash